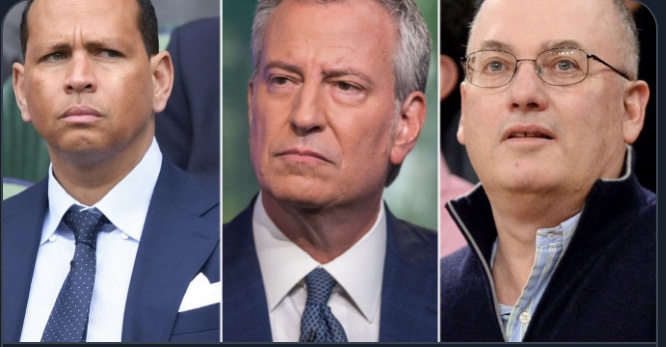 Ok let’s put the cards on the table, as a Yankee fan, I’ve never hated the Mets and I think the main reason is they have never really posed a threat. When the Mets awarded the winning bid to BILLIONAIRE Steve Cohen, it did make me think that the Mets potentially could be a threat in the future but by then I hope the Yankees get their shit together and win a god damn title.

That being said, Steve Cohen seemingly faced no opposition as incoming owner, commissioners office approved the sale and reports are the owners on Friday will vote to allow the sale from the Wilpons to Steve Cohen. What nobody saw coming was A Rod’s pettiness and how much of a dick NYC Mayor Bill Deblasio is.

Column: Alex Rodriguez isn’t just a cheat, he’s a sore loser. Now he has a gasbag enabler in Bill De Blasio, his clear mission to have each of the citizens he serves detest him by the time he mercifully leaves office — #Mets fans at the front of the line. https://t.co/SuX5frqYfS

Time is running out for the Mayor to block the sale to Cohen but having the Mayor of NYC, a sitting Senator and a former MLB owner trying to block a sale, you are in the middle of some shit.

As much as Met fans have been tortured for the last two decades under the Wilpons control, having a new owner blocked from coming in would be a serious plot twist.