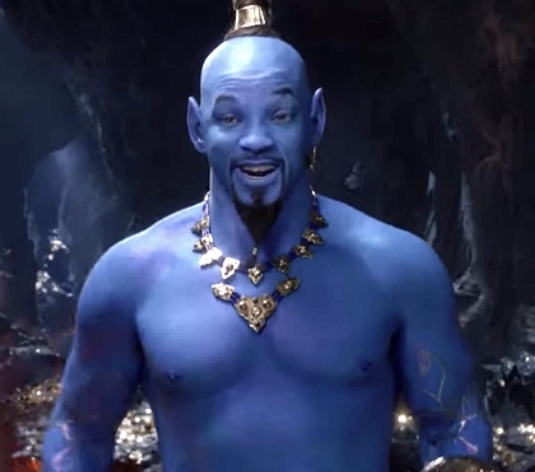 So Disney has released a new trailer for their live action adaptation of the beloved Aladdin. One of the major questions going in was who would play Genie, that was answered with Will Smith. The next question was, how would he look as the Genie. Well ladies and gentlemen, that has finally been answered with this latest trailer and its bad!

“Your life begins now… Aladdin”. Watch this special look at Disney’s #Aladdin, in theaters May 24. pic.twitter.com/XzZozU81DU

Will Smith looks just ridiculous as Genie, he is basically painted blue and has a pony tail. I gotta be honest, I was on board with a live action adaptation of this movie, but I can see now that Will Smith is going to be the weak link.

On the other hand Disney also released a new trailer to Tim Burton’s Dumbo and besides the bevy of amazing stars, the movie actually looks promising. Just from the trailer you feel automatically transported to the world of Disney.

A showstopper you have to see to believe. Watch a brand new sneak peek of #Dumbo, and see the film in theatres March 29. pic.twitter.com/boMxrX8TWk

Gotta be honest, I would likely watch both but if I had to put money on one of these movies being a more solid film, I am putting all the kings gold behind Dumbo.